I proferred the binbag. "All the rubbish; in here please". Conor turned to his right, "Una, will you climb in now?" Una grinned and mimed throwing objects into the sack. "There's my hopes and dreams right there Conor."

Conor, Una, Lisette and I have known each other for half our lives. Well; Conor's not quite there - he's the elder statesman of our group. We met when we were working for British Airways as students, and living in Hounslow's finest dodgy digs. Since that time we've been scattered to the four winds; Una to Ireland, Conor to Switzerland. Lisette and I, well, maybe 3 miles tops to Twickenham.

In seeking a mutual meeting place we found ourselves reaching for the logistically logical location: Italy. (I know; like a stepladder where you least expect it.)

In keeping with how we first got to know one another, luxury accomodation was not our priority. We decided to camp. Can there be a fuller way to challenge your fear of shared toilet facilities? When one considers the possibilities afforded by a squat toilet I would suggest not. Thus it came to pass that 4 adults and 4 children went camping together on Lago Maggiore. 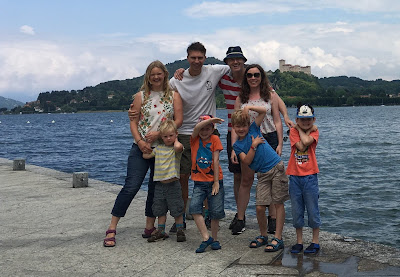 The joy of travelling with Benjamin and James is the vicarious appreciation. Like it or not, as we age we become inevitably dulled by the remarkable things in life. Do you still gaze out of the window of the aeroplane open-mouthed, as the earth drops away beneath you? Do you jump up and down emitting a voluble "yayyyyyy!!!!" because you've just been on a cable car?

Events that should spark joy inside us, and once did, end up being things we don't notice. Experiences we should appreciate and feel deep in our gut, no longer provoke wonder. I don't think it's our fault. It's just nature. Familiarity breeds contempt and all that. Or at least boredom.

As we left the runway our on EasyJet flight to Milan, James (who is 3) gazed out of the window of the aeroplane in complete awe. Occasionally turning back to the rest of us to check we'd noticed that London's clouds were now beneath us rather than above, slack jawed by the all out incredible-ness of defying gravity. And quite right too! This is why I dig travelling with the boys; they have the reactions that I used to have. It thrills me to be reminded.

Also, I must admit, there are other advantages to their company. Would I have been invited onto the bridge of a ship if I *didn't* have a 5 and 3 year old with me? Probably not. Thanks to a generous Captain, both Benjamin and James got to see the view from the top deck of the craft navigating us from Stresa to Arona across the lake. Not only that, they got to take the helm, steer our noble metal steed and (obvs) parp the horns. All the while, Lisette, Una and the rest of the passengers sat unaware of the junior helmsmen to whom their lives were entrusted. As far as the boys are concerned, life goal = achieved. 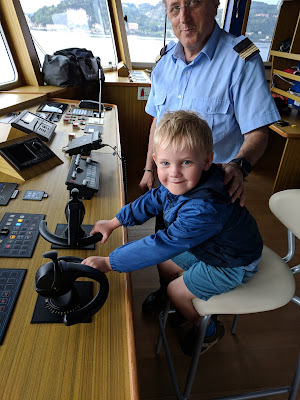 Revolut is really turning out to have unexpected benefits. For those that don't know what it is, Revolut is a debit card. You can top it up on your phone with pounds, and spend those pounds in Euro, Swiss Francs etc without getting a horrendous FX rate. But that's not the killer feature. No; the reason you should write home is the little discussed (but all important) feature it offers: embarrassment-reduction.

Did you ever go up to the counter in a bar and in your best pidgin Italian utter "Uno cappuccino per favore e duo croissants... Uh per favore. Um.... Grazie"? Perhaps you use less pleasantries but I find that when you've no idea of the language you're speaking, it pays dividends to liberally season your utterances with Ps and Qs. If things have gone well, food and drink will be headed your way. But what comes next? They'll tell you what it cost. In Italian. The rotters. You see, I can just about mumble an Italian sentence. Understanding one... That's another matter entirely. Neither Conor, Una, Lisette or I have any real Italian to speak of. Non una salsiccia.

Traditionally at this point of the transaction I would be squinting hard as I attempted to guess the meaning of "quattro euro trentaquattro". After 20 seconds of pondering, 10 seconds of frustration, and 5 of desperation I would generally proffer a 20 Euro note and hope that I'd get change. This works as a strategy in the short term but it has the downside of landing you with more coins than a fruit machine. By the end of a trip I'm jingling all the way.

But with my handy Revolut card I have a get-out-of-jail-free. Don't bother working out what they've said the cost is - give them the card. Don't listen attentively, think hard and attempt comprehension of Italiano.... Give them the card! I realise this is weak and isn't exactly aiding my personal development... But it is convenient.

By the way, this is exactly how languages die out. Foreign languages, killed by laziness circa 2050. Carry on camping! 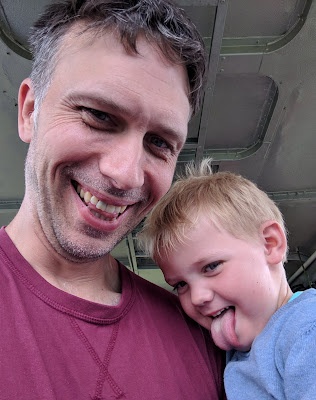