A voyage around my father‏

My name is James Edmund Reilly. Hullo there! You seem a little bored. No matter; I have the remedy. Let me tell you about how my holiday began. 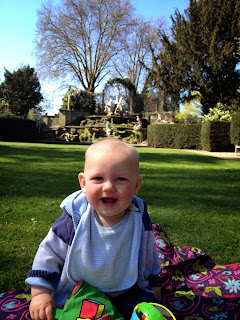 It was Wednesday 15th April, 2015. In Twickenham, where I'm proud to lay my hat, spring was determinedly springing. I awoke at 4:30am to the tuneful warblings of birdsong. Not wanting to be left out I decided that I would join my feathered friends in their early morning chorus. I gave voice and cleared the lungs with a good howl. I imagine it really added something to the melody. After around 15 minutes of this I felt I was done. By now I could hear daddy downstairs moving around and I settled back to rest, content in the knowledge of a job well done. Not only had I added to the music of the morning but I knew Daddy doesn't like to waste the day. I'd given him the wonderful gift of an extra 2 hours of awake time before everyone else got up. I knew he'd be pleased as punch. Mummy and I soon drifted off again.

When I came to later on I was downstairs in the kitchen. Daddy was busy making coffee for a decorator. The man didn't speak English but it was clear to me he didn't actually want a drink. However that didn't deter my father and the frustrated decorator, seeing the way the wind was blowing, reluctantly acquiesced. It was clearly a strange British custom about which nothing could be done. I could see him thinking: "Things are far more straightforward back in the old country, to be sure". As soon as he could, he trotted briskly down to the bottom of the garden, bearing the newly presented Starbucks mug of the brown stuff. I think he was trying to keep as great a distance between himself and my father as was possible. Fair enough say I; Daddy can be an odd bird.

We were travelling out to Mallorca to see Granny Annie and Aunty Severine. Mummy and daddy then began to pack. Well, mummy did anyway. Daddy did a lot of looking alternately pensive, worried and bored. I'm sure that was equally useful.

We boarded the train at St Margarets Station and changed at Clapham Junction for Gatwick. Benjamin, my elder brother, was in 7th heaven. "Trains!" he exclaimed, repeatedly. As people tramped past me they smiled. Yeah - I'm cute me.

Throughout the airport Benjamin insisted upon "shoulders". That is to say, he made Daddy carry him on his shoulders. Daddy did his best but after a while he seemed a little.. Droopy?

Aboard the aeroplane we took our seats. We had a whole row to ourselves. Benjamin sat next to the window. Mummy in the middle and Daddy took the aisle seat. Better for his leg he said. I sat on Mummy. Well, stood on Mummy would perhaps be more accurate. I didn't feel like sitting down - it was all so exciting!

For instance, in the row in front there were 3 ladies with peculiar voices. Australian, I decided. They looked most interesting. Priscilla, the lady in front of Daddy, had pink pink hair. Well, apart from the roots. They were another colour. Her face looked a little different to most ladies I know. There was lots and lots of powder on it. Also, her eyelashes were very bristly and black. Like a chimney sweeps brush. And her lips, matched her hair.

I thought she would be worth investigating and so I reached forward to do just that. I wondered what her face looked like underneath and I elected to try and rub some of the emulsion off her to see. Daddy didn't appear to be completely on board with my plan and pulled me back. So I settled for a little play with her seat back instead.

"My hair! He touched my hair!"

Priscilla was freaking out. She rounded upon Mummy and said, in an accusatory fashion, "Children freak me out" (she wasn't wrong) and "Don't let it touch me". Following up with some other choice phrases.

It!!! It???!!? The painted lady had harshed my mellow somewhat. Mummy seemed a little anxious after Priscilla had finished her tirade so I held her for a while. She needed comforting. I also expressed my considered opinion of Lady P by filling my nappy. That'd show her! 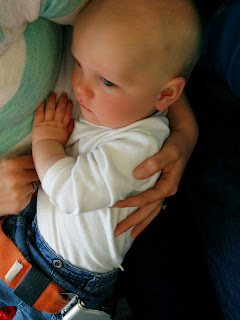 With that I went to sleep and didn't awake until Mallorca. At the end of the flight Mummy and Daddy seemed a little bit broken. But not to worry; I'll take good care of them. They'll be fine soon. Probably.