The Rules Exist for a Reason

March 31, 2012
It was now evening in Sicily and the sun was beginning to set. Lisette and I found ourselves in a cafe 5 miles from where we were lodging. The cafe was filled with about 40 elderly men; all drinking coffee and talking loudly. I tried addressing the man behind the counter:

"Scusi Signore" I ventured (my Italian is not fantastic), "uhmmm, taxi... Scopello... Per favore?" The barman frowned. "Non. No taxis in Castellammare." And there he left it.

It had, all told, been a very long day indeed. Lisette and I had arrived the previous night in Scopello a town that sits roughly halfway between Palermo and Trapani on the West side of Sicily. We first visited Scopello the year before and liked what we saw. It was a magical, though undeniably tiny, place packed with restaurants and cafes and situated next to the Zingaro - a massive nature reserve. We only stayed there for a day on that occasion, and we loved it.

Lisette and I have rules when it comes to travelling. It sounds a bit extreme I know but we've found that following these rules has worked in our favour more often than not.

Rule #1: Never go back - it's never the same the second time round no matter how much fun it was the first time
Rule #2: Never book your accommodation - websites lie and some of the nicest places we've ended up in have come about accidentally.
Rule #3: Never stay in one place for the whole trip - why stay in one place when there's a whole country to explore?

But this time we decided to break the rules. We knew Lisette would be 6 months pregnant when we went and so we probably needed to make some adjustments. We broke our rules. Every one.

When we arrived on Saturday night in Scopello it was dark. The square was deserted and our only companions were the town dogs. All the restaurants were shut. On Saturday night. There were six people were staying in our hotel that night, two of those people were us. And our room turned out to be a vivid green in colour. For those of you unaware, green is a colour Lisette is only willing to tolerate in grass and leaves and she has outlawed it when it comes to interior decoration. Finally our room number was #13. I'm not remotely a superstitious man but it kind of felt appropriate... We had broken the rules and the universe was extracting its pound of flesh. We had to take action.

I woke early the next morning to find Lisette had a plan:
- "Let's go to Erice!"
- "We don't have a car"
- "Not a problem. We catch a bus from the main square to Castellammare. Then we catch a bus to Castellammare train station. Then we catch a train to Trapani. Stay with me... you're going to like this... We catch a cable car from Trapani up the hill to Erice which is a pretty hill town with lovely streets and views and things... What do you think?"

I liked the cut of her jib. And I very much liked the idea of a cable car. So an hour later we boarded the bus and were away. An hour after that we arrived at the train station and that's where the fun began....

Trains in Sicily seem to run in an entirely different fashion to trains in other countries. They are not apparently bound by schedules; certainly little of what we read in what we have dubbed the "Omertà timetables" came to pass. It feels as if trains in Sicily operate in a fashion closer to pirate ships than to commercial ships. One imagines the train driver and his crew rising in the morning to cries of "Avast me hearties - which fair stazione shall we bear to the day? We ride the seven rails etc..."

It is at once a glorious and terrible anarchy which is only compounded by the insanity of the ticket situation. Namely, without a ticket you cannot ride the train. Which would be fine but when we sought to buy tickets the ticket office was shut. After we'd missed a few trains (having been made to effectively walk the plank by various ticket inspectors) a man arrived on the platform sold us tickets and then went back home visibly worn out by his exertions.

It quickly became apparent that in the off-season this is how Sicily functions. In Trapani, Lisette and I tooled along to the cable car to find it still shut for winter whilst proudly pronouncing on it's noticeboard that it had in fact opened for business 2 days previously. Still, we were not to be deterred and caught a taxi up the hill to magnificent hill town of Erice. We were delighted, we'd set out to get to Erice without a car and by Jove we'd followed this route and made it!:


View Larger Map
- "Lisette... You know we've just arrived in Erice?"
- "Yes my love"
- "And it's all really pretty isn't it? Amazing views from the top of the hill, picturesque streets..."
- "Yes it's beautiful isn't it? Have you seen the clouds blowing through the town? We're *that* high up we're in the clouds!!!"
- "Hmmmmmmm... well take a good look around because the last bus for Trapani leaves in 10 minutes."
- "Arrggghhhh!!!!!"

Yes my friends, having travelled for 4 hours and spent a grand total of 20 minutes at our destination we now found ourselves heading back home nearly immediately. We were broken. Nothing was coming easily. Everything was hard work. We were not jolly. We were short changed by a ticket machine in Trapani (when even machines have turned against you know something is wrong) and once again denied entry to a train by Blackbeard the Bloodthirsty (ticket inspector 1st class).

Finally we were in front of the bartender in Castellammare who was assuring us that there was no taxi service. We were pretty near tears and unsure what to do next. Then the bartender said "private car" and picked up the phone. He made a quick call and said to us "a man will pick you up in 10 minutes". We could have kissed him.

True enough a man arrived shortly and started driving us the 5 miles to Scopello. He turned out to be a New Yorker who'd moved over to Sicily from Queens some 29 years before. We talked as he drove:

- "Really thanks for driving us. We were pretty stuck... I'm John, this is Lisette"
- "My name's Bernard. But I don't really like it. Sounds like a dog. You know, St Bernard?"
I nod.
- "I've never liked Bernard. I prefer to go by 'Dino' instead."
- "That sounds a bit like 'dingo'"
What was I thinking? I said it before I thought about it and in my head I now had Meryl Streep chiming "the dingo took the baby" on repeat. Bernard / Dino gives me a funny look. And well he might. I spend the rest of the journey thinking of what I can say to make things up. Finally I gush "Bernard - you'll never be a dog to us." This tickles him. And then he relieves us of 20 euro for the ride to Scopello.

Lisette and I were feeling pretty low that night but I'm happy to say things turned around wonderfully. We spent the rest of the week buying arancini and bottles of water from the town and hiking into the Zingaro reserve accompanied by one of the town dogs. I love a dog.

It was fantastic in the end. And our next adventure begins in 3 months...


In the Zingaro; pregnant Lisette regards a gecko (presumed not pregnant) 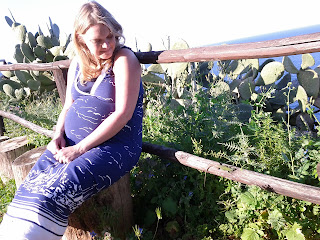