January 14, 2012
We found out Lisette was pregnant at about 2 weeks. A combination of common sense and tradition meant we decided to keep the news pretty much to ourselves to start with. And it's undeniable that we were shocked enough with the news as is without having to deal with other peoples reactions as well.

However, keeping the news of Lisette's pregnancy quiet up until this point has proved somewhat challenging. Lisette stopped drinking when she found out and to her surprise a friend, let's call him Chris for now, clearly noticed straightaway (what this says about Lisette I couldn't possibly comment). For Chris truly hates not to know a secret. Subsequently any time we met up with him we would be entertained by the ways in which he sought to know for sure. Various approaches were taken. There were the random questions:

We found this thread of questioning would roll round with startling regularity. Moving on, there was the night we were drinking at the Eel Pie on Church Street and everyone was chinking pint glasses and "cheers"-ing. Someone randomly asked "are we celebrating anything?". At which point Chris turned to me, fixed me with a look and said "I don't know John... Are we?"

Having got no joy with us Chris decided on a different tack... interviewing mutual compadres. Our friend, let's call her Sarah, was round visiting Chris for lunch. As it happened, Sarah was pretty much the only person who had advance knowledge of our news. Whether Chris had guessed this or not I cannot be sure but he certainly used it as his jumping off point:

- "So Sarah... do you think Lisette is pregnant"
- [Slightly stunned] "Why Chris, what makes you say that?"
- "Well, you know... I've noticed that Lisette hasn't been drinking recently. And I was thinking to myself... well Lisette's just glowing right now. Don't you agree?"

This about the woman whose spent the last 2 months clutching my hand and saying "John I'm nauseous - I need a ginger biscuit". After we heard that little tale we decided to deny knowledge of the child to Chris throughout the pregnancy and even after the birth. Our resolve on that point did not last long. We cracked and told him at 11 weeks. He seemed delighted; whether he was delighted that Lisette was pregnant or if he was simply pleased to finally been able to scratch his Sherlock-ian itch I couldn't say.


"And there Lisette are the Peaks.
So - are you sure you're not pregnant?" 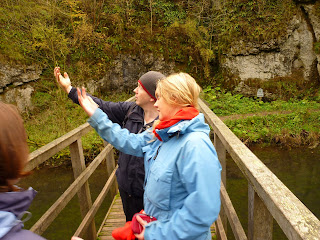