One thing I find fascinating about travelling around is the contrasts that you observe between different cultures. I’m not a believer that national stereotypes are the whole truth about a society but there generally seems to be some reality in amongst the myth.

Take “FREEDOM!!!”. We were in the process of inquiring about a trip to Stromboli (an active volcanic island) from a man who looked uncannily like George Michael in his first post-Wham days (mirror sunglasses; the whole shebang). He was, by any stretch of the imagination, an ebullient and noisy character. I liked him instantly. During his description of how the trip might pan out he wanted to illustrate to us that during the day we would have “free time” and indeed “freedom to wander” on Stromboli. Isn’t it obvious that the best way to communicate this to us would be via a capella version of George Michael’s “Freedom ‘90”?

Say what you like but it seems unlikely to me that people offering tours of the Scottish Islands are flogging their trips in a comparable fashion.


Getting my daily fix of coffee 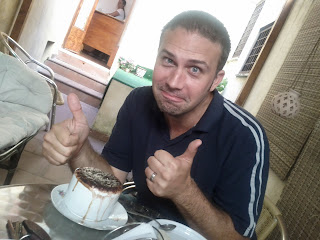 I’ve tried hard to boil down what the essential differences between Sicilians and Brits are. I’m not sure I’ve completely succeeded. What I can say is this: Sicilians are *generally* extremely vigorous and friendly. I have one caveat: Syracusians are excluded from this. They were the grumpiest, grouchiest, “we do not smile” type people I’ve ever encountered. Lisette actually made it her ambition to get a Syracusian smile. She failed! Wouldn’t have thought it possible.

But looking away from them and at Sicilians in the main let me present my evidence:
love,
John and Lisette

PS I am no Gok Wan but I would like to say this: wet look leggings were not designed to be worn in a loose fitting style. It makes them look like bin bags. That is all. 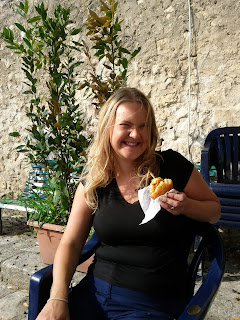