September 22, 2009
Greetings from Greece...... and Salutations from Santorini!

I am writing to you from Fira - the island capital.

Fira, is one of the few "vertical" towns which I've have had the pleasure to encounter. Nothing here is flat. Essentially Fira appears to be a cliff face onto which bits of shop, restaurant and pathway have been pinned - possibly by genial giants with an architectural bent. We are in a land truly unfamiliar to spirit-levels. 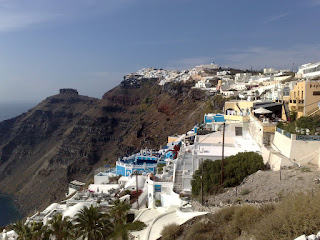 The net result of this means that everything feels like (and indeed is) exercise. Want a meal? Clamber up a cliff first. Want to go shopping? Go hiking first... And there are no shortage of shops / restaurants and similar here. Lisette and I were initially very worried upon arrival as despite having packed everything else we had left behind any kind of phrasebook. Normally we at least know a couple of numbers, "please", "thank you" and "could we have the bill please?" - not so this time. So our expectation was to spend our time here doing a lot of wild gesticulation and general mime just to get by. Fortunately for us everyone seems to speak English.

I exaggerate though - I could remember 1 Greek phrase. Petros (university compadre) had advised me before my departure that "thanks" in Greek is "eff-Harry's-toe". I was a little suspect of this as it sounded quite long for just "thanks". As a result I decided to do a little market research before actually employing it willy-nilly. (In case Pet had been having a little joke...)

Lisette and I were elbows deep in baklava at a very friendly cafe yesterday and, in conversation with the very jolly owner, confirmed that, yes indeed, "eff-Harry's-toe" was as promised.

The jolly owner clearly felt that we were firm friends now that this had been established and seized me by the arm. "Come!!", he bellowed and pulled me inside the cafe, "you must see!!" I was a little concerned by the, to be frank, mania that was being emitted from the mans eyes but since he was very strong I went with him until the vice like grip on my arm slackened. Before us was a cardboard box, sitting on a table. "Birthday cake!" the cafe owner bellowed. He then flicked open the box to reveal a cake with an image emblazoned upon it which, were it published in a magazine in England, would land it straight on the top shelf - possibly even behind the counter in a brown paper bag. They clearly do birthdays differently in Greece. Alas there were no candles present and so I can't inform as to the age of the recipient. I'm assuming it wasn't a kiddies birthday cake but stranger things have (probably) happened. 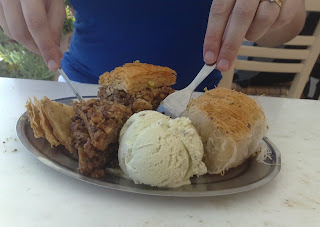 We do appear to have landed on the island of strange cover versions. Lisette and I were sitting in a cafe the other afternoon and watching the cable cars go up and down from Fira to the port. There was the typical sort of background music playing over the cafe stereo - old Roxette tunes and whatnot. Then Lisette observed that we appeared to be listening to Gregorian monks chanting. Upon further examination the Gregorian monks were in fact chanting recognisable song lyrics. In fact, they were intoning the lyrics of REM's "Losing My Religion" - quite the unexpected song for a Gregorian monk (of all things) to chant, I think you'll agree.

We're not sure if the Gregorian monks actually knew what they were chanting. It's possible that this was some kind of monk-ish ironic dig at Michael Stipe but they did sound very serious. And to be honest it's hard to imagine a monk standing up (presumably in a monestary somewhere) and saying (in a Michael Caine stylee) "hold on lads - I've got an idea..." before relaying plans to cover said song. There is also the possibility that the monks didn't speak English and didn't actually know what it was they were chanting... However given the general English ability of the island shopkeepers this seems somewhat unlikely... Perhaps we'll never know...

The mystery grew ever stronger the next day as when examining the wares of some merchant or another we became aware of KRS-ONE's "Sound of da Police" being intoned in traditional Greek singing style. Sample lyrics:

Imagine, if you can, that being performed in the style of "Zorba the Greek", accompanied by a mandolin, and sung by a man who sounds imminently about to break plates and down gallons of ouzo. Very strange. We are now on "cover-version watch" - ever waiting for the next installment...