Witness to a Crime ("I know kung fu")

Have had eyes opened to the seedy underbelly of France. Am shocked and appalled.

Lisette and I had moved on from Ambois to Blois (about 20 minutes up river) and were exploring the local market. Very scenic, rotisseries full of chicken being roasted, stalls carrying great wedges of nasally powerful cheese. Interesting soap, you know the like.

The marketplace was crawling with people and as we stood taking it in I felt a slight prod behind me. When I turned around I realised a French woman on a bike (say early-40s) had just run into me. I moved aside and watched her cycle on through the marketplace colliding with people as she went. Perhaps unsurprisingly, not everyone took this well. An old man (80+ if he was a day) who was on the receiving end of one of her collisions with the masses took umbrage. He bellowed something French at her and waving his arms chased after the woman through the marketplace in the style of a zombie in Dawn of the Dead. She, for her part, was as interested in this as the rest of us and stopped on her bike to watch the strange not quite undead man scampering in her direction.

What happened next was unexpected. The man reached the woman and without pausing for breath (which zombies probably dont need anyway) he struck her full in the face. There followed that sort of stunned silence that follows a shock to the normal social cohesion. You could see men throughout the crowd all involuntarily taking a step forwards - all presumably having reached the conclusion that this not good and it was indeed their duty to do something. You could see on our faces the conumdrum being furiously turned over - it's an old man, we can't hit him, but he hit her, that wasn't right, he might hit her again, we must do something... But what?

Whilst we pondered the social niceties of restraining an old (but clearly not enfeebled) man, the woman on the bike took her chance to react. She leapt off the bike and in one massively unexpected moment executed an elegant drop kick on the old man. Doing the proper Bruce Lee on her opponent. The man staggered backwards and once again you could see the cogs whirring throughout the crowd: That woman has just kicked an old man, that's not right, but he did hit her, so I guess that's fair, mind you two wrongs dont make a right, someone should do something... Still not sure what though...

I fancy that in the end people would have stepped forward and restrained both parties but in the end it proved unnecessary. The man decided that discretion was the better part of valour and started retreating with great haste. The woman started shouting something about the police and pulled out her phone so she could take a picture of her assailant.

The man was last seen retreating backwards whilst shouting and being pursed by the woman taking snap after snap. It was like a very surreal and aggressive photo shoot. 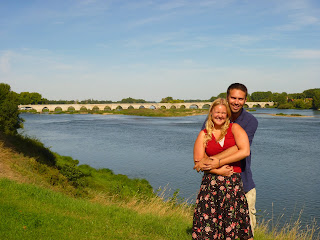 Happy to report that I am now a well man. Lisette on the other hand has completely caught what I have and is suffering. Fortunately we've now made it down to Ken and Annies in Moraira (Spain) and so Lisette is being well cared for...


Safe with the folks 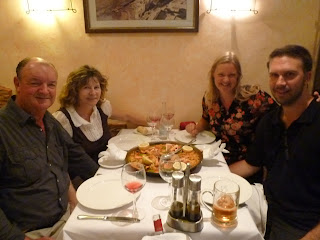